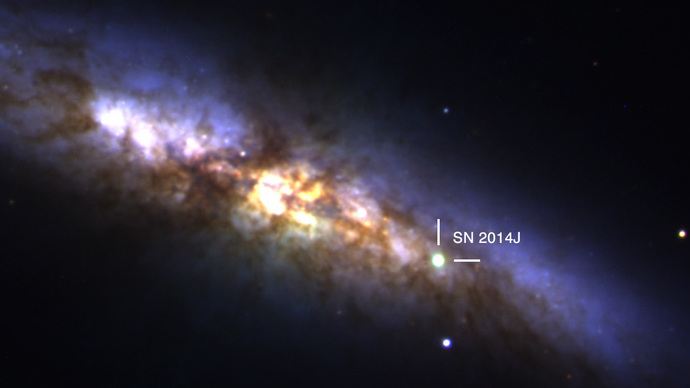 OSK, Stockholm - Supernova 2014J in the nearby galaxy M82 -- less than 12 million light-years away -- was first seen on January 14, 2014, and was the closest “standard candle” supernova since (at least) 42 years. A coordinated observational effort orchestrated by the intermediate Palomar Transient Factory (iPTF) team and led by Ariel Goobar from the Oskar Klein Centre at Stockholm University (Goobar et al. 2014, The Astrophysical Journal Letters, 784, L12) provides important new clues into the nature of these explosions, as well as the environments where they take place. The proximity of SN2014J allowed the iPTF team to study this important class of stellar explosions, known as Type Ia supernovae, over a very wide wavelength range, starting just hours after the deduced explosion time.

Furthermore, Goobar and collaborators used pre-explosion images of the region of M82 where the supernova went off, both from the Hubble Space Telescope and from the Palomar Oschin Telescope, to search for a star in the location of the explosion, or possible earlier nova eruptions. The lack of pre-explosion detections suggests that the supernova may have originated in the merging of compact faint objects, e.g., two white dwarf stars, i.e., the kind of Earth-size stars that our Sun will evolve to once it runs out of nuclear fuel.

“Until very recently, the leading model for standard candle supernovae was thought to include a companion star from which material was stripped by the white dwarf until the accumulated mass could no longer be sustained by the outwards pressure, leading to a runaway thermonuclear explosion. The observations of SN2014J are challenging for this theoretical picture,” says Goobar.

Type Ia supernovae are among the best tools to measure cosmological distances. Thanks to their consistent peak brightness, these “standard candles” are used to map the expansion history of the universe. In 1998 distance measurements using supernovae led to a paradigm shift in cosmology and fundamental physics: the expansion of the universe is speeding up, contrary to the expectations from the attractive nature of gravitational forces: a mysterious new cosmic component, “dark energy,” has been invoked to explain this unexpected phenomenon. This discovery was awarded the 2011 Nobel Prize in physics.

“Since Type Ia supernovae are very rare, occurring only once every several hundred years in a galaxy like ours, there have been very few opportunities to study these explosions in great detail. SN2014J in the nearby galaxy M82 is a very welcome exception,” says Rahman Amanullah, a researcher at OKC.

A better understanding of the physics behind Type Ia supernovae and the material surrounding the explosion and dimming some of the light is crucial to further refine the measurements of the expansion history of the universe. Joel Johansson, a PhD student at OKC who played an essential role in the analysis, fills in, “Many supernovae explode in clean environments, free of dust in the line of sight. This is not the case for SN2014J, which gives us a unique opportunity to study both the properties of the supernova explosion but also of the intervening dust.”

The lessons learned by the studies of SN2014J may be very useful for the analysis of the large Type Ia SN sample that scientists have collected over decades, especially the astrophysical corrections needed to make accurate distance estimates. Only then may we be able to tell what is causing the accelerated expansion of the cosmos.