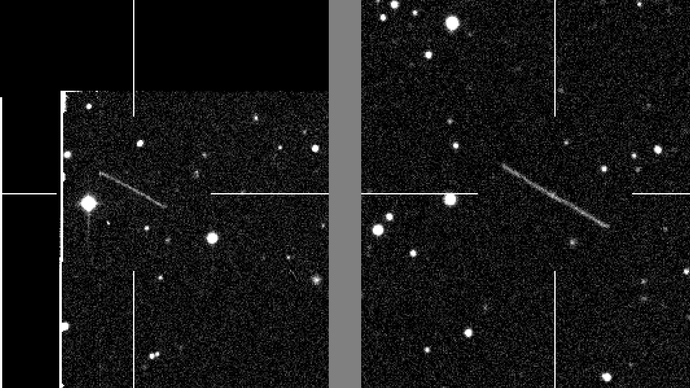 Discovery images of NEA 2014 JG55, a 10-meter sized rock that passed only 1/4 as far as the Moon from Earth on May 10, 2014. In the two hours separating these images, the object's apparent motion (indicated by the streak it forms on the images during the exposure) increased by 50% to 1.5 degrees per hour, and it brightened from 18th to 17th visual magnitude.

On the night of May 10th 2014 UTC, the Palomar Transient Factory (PTF) survey's recently enhanced system for asteroid discovery turned up a very nearby, very fast-moving near-Earth asteroid (NEA).

A software pipeline, co-developed by the Infrared Processing and Analysis Center (IPAC) at Caltech, the machine-learning group at the Jet Propulsion Laboratory (JPL) and by grad student Adam Waszczak (Caltech), processes images from the PTF camera (on the 48-inch Oschin telescope at Palomar) in real-time and outputs candidate streak detections for screening during the night.

Upon finding the streak early Saturday morning, Waszczak triggered follow-up images with the 48-inch telescope, the large field of view of which enabled its recovery. Observations were posted to the NEO confirmation page hosted by the Minor Planet Center (MPC) to solicit follow-up observations from observers around the world. After sunrise in California, two observing facilities in Japan obtained additional astrometry, allowing the object's orbit to be computed. The MPC then issued an electronic circular (http://www.minorplanetcenter.net/mpec/K14/K14J98.html) assigning the asteroid the official designation 2014 JG55.

At the time of its discovery, 2014 JG55 was at one lunar distance and rapidly approaching. At closest approach (Saturday afternoon Pacific time), it was a mere 0.25 lunar distances away and moving about 10 kilometers per second relative to Earth. This makes 2014 JG55 the third closest near-miss recorded in 2014. The orbit of 2014 JG55 brings it close to Earth every two years, though this particular encounter was much closer than any of its computed past or predicted future close approaches.

An estimated 3 to 8 meters in diameter, 2014 JG55 is about one-half to one-third the size of the object which exploded over Chelyabinsk, Russia in 2013. It is roughly the same size as 2014 AA, another asteroid which was discovered in January 2014 and assumed (but not witnessed) to have impacted over the Atlantic Ocean shortly thereafter. Roughly one billion NEAs of this size are predicted to exist, only a very small fraction of which have been discovered.

The discovery of 2014 JG55 demonstrates the PTF survey's commitment to surveying this population of small asteroids, which are viewed as both impact hazards and potential targets for manned and robotic space exploration. NEA science is expected to be a significant component of PTF's successor program, the Zwicky Transient Facility (ZTF, planned to come online in 2016).

Development of the iPTF asteroid detection pipeline was supported by the W.M. Keck Institute for Space Studies and by NASA JPL internal research and technology development funds.