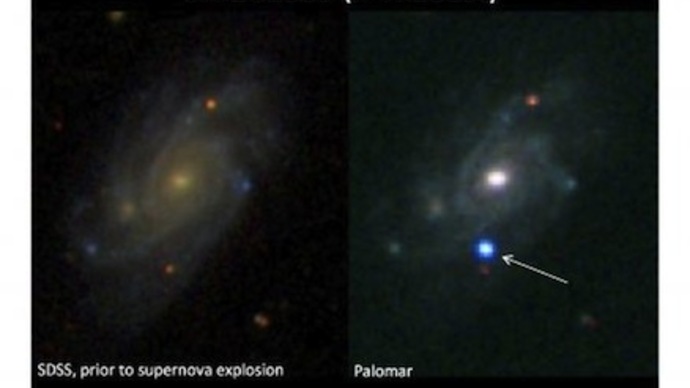 A star in a distant galaxy explodes as a supernova: while observing a galaxy known as UGC 9379 (left; image from the Sloan digital Sky Survey) located about 350 million light years away from us, the team discovered a new source of bright blue light (right, marked with an arrow). Credit: Avishay Gel-Yam

Supernova Caught in the Act by Palomar Transient Factory

Supernovae—stellar explosions—are incredibly energetic, dynamic events. It is easy to imagine that they are uncommon, but the universe is a big place and supernovae are actually fairly routine. The problem with observing supernovae is knowing just when and where one is occurring and being able to point a world-class telescope at it in the hours immediately afterward, when precious data about the supernova's progenitor star is available. Fortunately the intermediate Palomar Transient Factory (iPTF) operated by Caltech scans the sky constantly in search of dramatic astrophysical events. In 2013, it caught a star in the act of exploding.

The iPTF is a robotic observing system mounted on the 48-inch Samuel Oschin Telescope on Palomar Mountain. It has been scanning the sky since February 2013. The iPTF (and its predecessor experiment, the Palomar Transient Factory [PTF], which operated between 2009 and 2012) regularly observes a wide swath of the night sky looking for astronomical objects that are moving and developing quickly, such as comets, asteroids, gamma-ray bursts, and supernovae. Both the earlier PTF and the current iPTF collaborations are led by Shrinivas Kulkarni, the John D. and Catherine T. MacArthur Professor of Astronomy and Planetary Science and director of the Caltech Optical Observatories.

Last year the iPTF discovered an object of special interest: a supernova with a spectral signature suggesting that its progenitor star was a Wolf-Rayet star. Massive stars are typically structured like an onion, with the heaviest elements in the core, while lighter elements are layered over them and then frosted, if you will, by a layer of hydrogen gas on the stellar surface. Wolf-Rayet stars, which are unusually large and hot, are exceptions to this rule, being relatively deficient in hydrogen and characterized by strong stellar winds. Astronomers have long wondered if Wolf-Rayet stars are the progenitors of certain types of supernovae, and according to a recent paper published in Nature this is just what the iPTF found in May 2013.

This supernova, SN2013cu, was picked up on a routine sky scan by the iPTF. The on-duty iPTF team member in Israel promptly sounded an alert, asking colleagues at the W. M. Keck Observatory on Mauna Kea to take a spectral image of the supernova before the sun rose in Hawaii.

When supernovae explode, they briefly ionize the sky immediately around them. The ionized materials rapidly recombine, producing unique spectral features that enable astronomers to get a full picture of the ambient material of a supernova event. This process lasts from minutes to a few days and hence is called a "flash spectrum" of the event. Flash spectrography is a novel observational method developed by Avishay Gal-Yam of the Weizmann Institute of Science in Israel, leader of the team that published the Nature paper.

In the case of SN2013cu, the flash spectrum showed relatively less hydrogen and relatively more nitrogen, suggesting that perhaps the progenitor of the supernova was a nitrogen-rich Wolf-Rayet star. This finding will enable astronomers to better understand the evolution of massive stars and identify potential progenitors of supernovae.

"I could not believe my eyes when I saw those high-ionization features perfectly matching emission lines from a Wolf-Rayet star," says Yi Cao, a graduate student from Caltech who works with Kulkarni. "Our software pipeline efforts were paying off. Now we are working even harder so that we can get flash spectra of many more supernova flavors to probe their progenitor stars."

Above all, the observation of SN2013cu highlights the success of the intermediate Palomar Transient Factory at catching the universe in the act of doing something interesting, something that might merit a second look. Though especially intriguing, SN2013cu is only one of over 2,000 supernovae that PTF/iPTF has detected during its four and a half years of observations. As Kulkarni remarks, "I am proud of how the global iPTF network is working together to invent new techniques enabling entirely new science."

The iPTF is a collaboration between Caltech, Los Alamos National Laboratory, the University of Wisconsin–Milwaukee, the Oskar Klein Centre, the Weizmann Institute of Science, the TANGO Program of the University System of Taiwan, and the Kavli Institute for the Physics and Mathematics of the Universe.