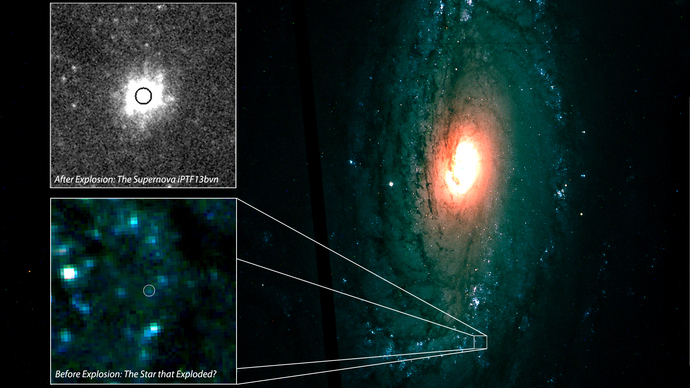 Developed to help scientists learn more about the complex nature of celestial objects in the universe, astronomical surveys have been cataloguing the night sky since the beginning of the 20th century. The intermediate Palomar Transient Factory (iPTF)—led by the California Institute of Technology (Caltech)—started searching the skies for certain types of stars and related phenomena in February. Since its inception, iPTF has been extremely successful in the early discovery and rapid follow-up studies of transients—astronomical objects whose brightness changes over timescales ranging from hours to days—and two recent papers by iPTF astronomers describe first-time detections: one, the progenitor of a rare type of supernova in a nearby galaxy; the other, the afterglow of a gamma-ray burst in July.

The iPTF builds on the legacy of the Caltech-led Palomar Transient Factory (PTF), designed in 2008 to systematically chart the transient sky by using a robotic observing system mounted on the 48-inch Samuel Oschin Telescope on Palomar Mountain near San Diego, California. This state-of-the-art, robotic telescope scans the sky rapidly over a thousand square degrees each night to search for transients.

Supernovae—massive exploding stars at the end of their life span—make up one important type of transient. Since PTF's commissioning four years ago, its scorecard stands at over 2,000 spectroscopically classified supernovae. The unique feature of iPTF is brand-new technology that is geared toward fully automated, rapid response and follow-up within hours of discovery of a new supernova.

The first paper, "Discovery, Progenitor and Early Evolution of a Stripped Envelope Supernova iPTF13bvn," appears in the September 20 issue of Astrophysical Journal Letters and describes the detection of a so-called Type Ib supernova. Type Ib supernovae are rare explosions where the progenitor star lacks an outer layer of hydrogen, the most abundant element in the universe, hence the "stripped envelope" moniker. It has proven difficult to pin down which kinds of stars give rise to Type Ib supernovae. One of the most promising ideas, says graduate student and lead author Yi Cao, is that they originate from Wolf-Rayet stars. These objects are 10 times more massive and thousands of times brighter than the sun and have lost their hydrogen envelope by means of very strong stellar winds. Until recently, no solid evidence existed to support this theory. Cao and colleagues believe that a young supernova that they discovered, iPTF13bvn, occurred at a location formerly occupied by a likely Wolf-Rayet star.

Supernova iPTF13bvn was spotted on June 16, less than a day after the onset of its explosion. With the aid of the adaptive optics system used by the 10-meter Keck telescopes in Hawaii—which reduces the blurring effects of Earth's atmosphere—the team obtained a high-resolution image of this supernova to determine its precise position. Then they compared the Keck image to a series of pictures of the same galaxy (NGC 5806) taken by the Hubble Space Telescope in 2005, and found one starlike source spatially coincident to the supernova. Its intrinsic brightness, color, and size—as well as its mass-loss history, inferred from supernova radio emissions—were characteristic of a Wolf-Rayet star.

"All evidence is consistent with the theoretical expectation that the progenitor of this Type Ib supernova is a Wolf-Rayet star," says Cao. "Our next step is to check for the disappearance of this progenitor star after the supernova fades away. We expect that it will have been destroyed in the supernova explosion."

Though Wolf-Rayet progenitors have long been predicted for Type Ib supernova, the new work represents the first time researchers have been able to fill the gap between theory and observation, according to study coauthor and Caltech alumna Mansi Kasliwal (PhD '11). "This is a big step in our understanding of the evolution of massive stars and their relation to supernovae," she says.

The second paper, "Discovery and Redshift of an Optical Afterglow in 71 degrees squared: iPTF13bxl and GRB 130702A," appears in the October 20 issue of Astrophysical Journal Letters. Lead author Leo Singer, a Caltech grad student, describes finding and characterizing the afterglow of a long gamma-ray burst (GRB) as being similar to digging a needle out of a haystack.

Long GRBs, which are the brightest known electromagnetic events in the universe, are also connected with the deaths of rapidly spinning, massive stars. Although such GRBs initially are detected by their high-energy radiation—GRB 130702A, for example, was first located by NASA's Fermi Gamma-ray Space Telescope—an X-ray or visible-light afterglow must also be found to narrow down a GRB's position enough so that its location can be pinpointed to one particular galaxy and to determine if it is associated with a supernova.

After Fermi's initial detection of GRB 130702A, iPTF was able to narrow down the GRB's location by scanning an area of the sky over 360 times larger than the face of the moon and sifting through hundreds of images using sophisticated machine-learning software; it also revealed the visible-light counterpart of the burst, designated iPTF13bxl. This is the first time that a GRB's position has been determined precisely using optical telescopes alone.

After making the initial correlation between the GRB and the afterglow, Singer and colleagues corroborated their results and gained additional information using a host of other instruments, including optical, X-ray, and radio telescopes. In addition, ground-based telescopes around the world monitored the afterglow for days as it faded away, and recorded the emergence of a supernova five days later.

According to Singer, GRB130702A / iPTF13bxl turned out to be special in many ways.

"First, by measuring its redshift, we learned that it was pretty nearby as far as GRBs go," he says. "It was pretty wimpy compared to most GRBs, liberating only about a thousandth as much energy as the most energetic ones. But we did see it eventually turn into a supernova. Typically we only detect supernovae in connection with nearby, subluminous GRBs, so we can't be certain that cosmologically distant GRBs are caused by the same kinds of explosions."

"The first results from iPTF bode well for the discovery of many more supernovae in their infancy and many more afterglows from the Fermi satellite", says Shrinivas Kulkarni, the John D. and Catherine T. MacArthur Professor of Astronomy and Planetary Science at Caltech and principal investigator for both the PTF and iPTF.

The iPTF project is a scientific collaboration between Caltech; Los Alamos National Laboratory; the University of Wisconsin, Milwaukee; the Oskar Klein Centre in Sweden; the Weizmann Institute of Science in Israel; the TANGO Program of the University System of Taiwan; and the Kavli Institute for the Physics and Mathematics of the Universe in Japan.