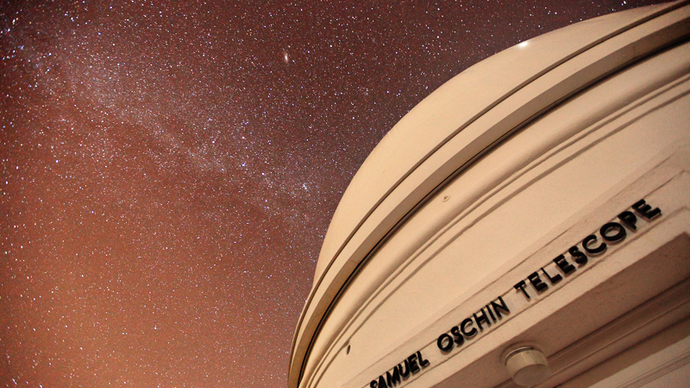 An innovative sky survey has begun returning images that will be used to detect unprecedented numbers of powerful cosmic explosions–called supernovae–in distant galaxies, and variable brightness stars in our own Milky Way. The survey also may soon reveal new classes of astronomical objects.

All of these discoveries will stem from the Palomar Transient Factory (PTF) survey, which combines, in a new way, the power of a wide-field telescope, a high-resolution camera, and high-performance networking and computing, with rapid follow-up by telescopes around the globe, to open windows of discovery for astronomers. The survey has already found 40 supernovae and is gearing up to switch to a robotic mode of operation that will allow objects to be discovered nightly without the need for human intervention.

The Palomar Transient Factory is a collaboration of scientists and engineers from institutions around the world, including the California Institute of Technology (Caltech); the University of California, Berkeley, and the Lawrence Berkeley National Laboratory (LBNL); Columbia University; Las Cumbres Observatory; the Weizmann Institute of Science in Israel; and Oxford University.

The flood of images, more than 100 gigabytes every night, is then beamed off of the mountain via the High Performance Wireless Research and Education Network–a high-speed microwave data connection to the Internet–and then to the LBNL's National Energy Scientific Computing Center. There, computers analyze the data and compare it to images previously obtained at Palomar. More computers using a type of artificial intelligence software sift through the results to identify the most interesting "transient" sources–those that vary in brightness or position.

Within minutes of a candidate transient's discovery, the system sends its coordinates and instructions for follow-up observations using the Palomar 60-inch telescope and other instruments.

Soon all of the steps in the process will be completely automated, including decisions about which transients merit a second look. When follow-up observations indicate that candidate transient detections show promise, a prioritized list of candidates is brought to the attention of astronomers from the PTF member institutions. Finally, an astronomer becomes personally involved, by performing detailed observations using telescopes such as Palomar's 200-inch Hale Telescope, a Keck Telescope in Hawaii, or other partner telescopes around the world.

The PTF is designed to search for a wide variety of transient sources with characteristic timescales ranging from minutes to months, giving astronomers one of their deepest and most comprehensive explorations of the universe in the time domain.

"By looking at the sky in a new way, we are ushering in a new era of astronomical discovery," says PTF principal investigator Shrinivas Kulkarni, MacArthur Professor of Astronomy and Planetary Science at Caltech and director of the Caltech Optical Observatories. "Nimble automated telescopes and impressive computing power make this possible."

"No one has looked on these timescales with this sensitivity before. It's entirely possible that we will find new astronomical objects never before seen by humans," says Nicholas Law of Caltech, the project scientist for PTF.

Because it looks for anything changing in the sky, the PTF survey covers a vast variety of different astronomical targets. The wide range of the survey extends across the entire universe. Astronomers expect to discover everything from stars exploding millions of light-years away to near-Earth asteroids that could someday impact our planet.

Much of the survey's time is spent searching for so-called Type Ia supernovae. These supernovae, formed from the explosion of a class of dead star known as a white dwarf, are very useful to astronomers because they can help determine the distance to galaxies located across the universe. Those distances allow astronomers to probe the origin, structure, and even the ultimate fate of the universe.

By operating more rapidly than previous surveys, PTF will also detect objects of a completely different nature, such as pulsating stars, different types of stellar explosions, and possibly planets around other stars.

The PTF already has found many new cosmic explosions, including 32 Type Ia supernovae, eight Type II supernovae, and four cataclysmic variable stars. Intriguingly, PTF also has found several objects with characteristics that do not exactly match any other objects that have been seen before. PTF astronomers are eagerly watching these objects to see how they change, and to determine what they might be.

The quantity and quality of incoming data have astonished astronomers working in the field. On one recent night, PTF patrolled a section of the sky about five times the size of the Big Dipper–and found 11 new objects. "Today I found five new supernovae before breakfast," says Caltech's Robert Quimby, a postdoctoral scholar and leader of the PTF software team. "In the previous survey I worked on, I found 30 in two years."